Additional Notes: The 9th Infantry Division was among the first U.S. combat units to engage in offensive ground operations during WW2. (The others were the 32nd and the 41st in the Pacific on New Guinea, Carlson’s Raiders on Makin Island, the 1st Marine, and the Americal on Guadalcanal, and, alongside the 9th in North Africa, were the 1st Infantry, 3rd Infantry and the 2nd Armored Divisions.) The 9th Infantry Division saw its first combat on  November 8th, 1942, when its elements landed at Algiers, Safi, and Port Lyautey, with the taking of Safi by the 3rd Battalion of the 47th Infantry Regiment standing as the first liberation of a city from Axis control in WW2. With the collapse of French resistance on November 11th, 1942, the division patrolled the Spanish Moroccan border. The 9th division returned to Tunisia in February and engaged in small defensive actions and patrol activity. On March 28th, 1943 it launched an attack in southern Tunisia and fought its way north into Bizerte, May 7th. In August, the 9th division landed at Palermo, Sicily, and took part in the capture of Randazzo and Messina. After being sent to England for further training, the division landed on Utah Beach on June 10th 1944 (D-Day +4). 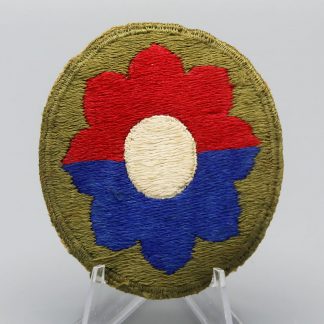