Additional Notes: The 15th AAF was established in November of 1943 in Tunis, Tunisia as part of the US Army Air Forces (AAF) in the WW2 Mediterranean Theater of Operations as a strategic air force and commenced combat operations the day after it was formed. The first commander was General Jimmy Doolittle.

The 15th AAF resulted from a reorganization of Doolittle’s 12th Air Force into the 15th with Doolittle in command, and the 9th AAF with Lewis Brereton in command. The new air force was activated with a strength of ninety B-24 Liberators and 210 B-17 Flying Fortresses, inherited from the 12th AAF and 9th AAF. In December, new groups, most of which were equipped with B-24s soon started arriving from the United States. 13 new groups were added.

It was hoped that the 15th AAF, stationed in the Mediterranean, would be able to operate when the 8th AAF in England was socked in by bad English weather. The 9th AAF would later move to England to serve as a tactical unit to take part in the invasion of Europe. Once bases around Foggia in Italy became available, the 15th AAF was able to reach targets in southern France, Germany, Poland, Czechoslovakia, and the Balkans, some of which were difficult to reach from England. 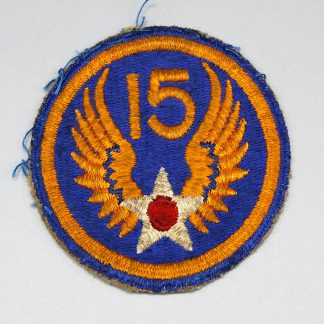