U.S. WW2 Army Officer’s Field “Ike” Jacket “. Wool O.D. Jacket has 3rd Army shoulder sleeve insignia on one sleeve and 2nd Infantry Division shoulder sleeve insignia (patch) on the other sleeve. Also, has CIB (Combat Infantryman Badge) above front pocket. Has domed Infantry EM collar disk (later collar disk) and flat U.S. EM collar disk, left as is, however, these EM disks should not be on this jacket. Has single D.I. (Distinctive Insignia) 47th division on shoulder strap, also appears to be mis-matched, however this is how it came so left as is. Contract tag size marked 38R and also has Army Officer’s Jacket Regulation tag as well. Heavily worn with a lot of scattered moth nips. Could be used as restoration project with correct setup or for insignia. 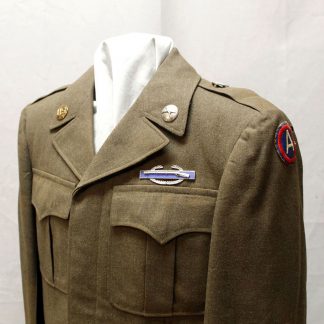