Additional Notes: The Eisenhower jacket also known as “Ike” jacket, officially listed as the Jacket, Field, Wool, Olive Drab, is a type of waist length jacket developed for the US. Army during the later stages of WW2 and named after Dwight  Eisenhower. Intended to be worn on its own or as an insulating layer beneath the M-1943 Field Jacket and over the standard wool flannel shirt and wool sweater, it featured a pleated back, adjustable waist band, fly front buttons, bellows chest pockets, slash side pockets, and shoulder straps. The jacket was modified in 1950 as a more closely tailored version of the Eisenhower jacket and without button cuffs (M-1950) . 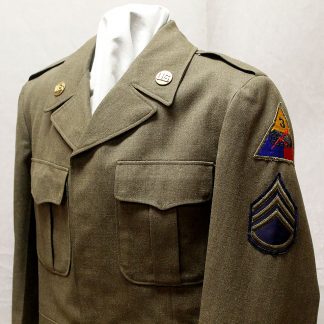