WW2 German Army Sand-Camoflauge M40 Combat Helmet. This is a nice Heer (Army) WW2 German helmet has a very unusual and thick paint that was likely added during the mid-to-late war period. The heavy texture is the result of a large amount of coarse sand being mixed into the paint, which was then brushed on, probably by the soldier “in the field.” This type of camouflage was intended to cut down reflected glare and slightly break up the helmet’s contour. Clearly the heavy coat of paint has added significantly to the weight of the helmet. The helmet was probably manufactured in 1941 and originally had the same slightly textured feldgrau finish that is seen on the inside of the helmet. It also had an Army eagle decal on the left side (which probably still exists underneath the current camo paint). Stamped inside the helmet is the factory code ET62, which signifies that it was made by the Eisenhuttenwerke factory of Thale, Germany. Also stamped inside is the batch number 865. The liner pins are obviously original to the helmet, indicating the M1931 size 55 liner has never been messed with. The chinstrap is full-length and has aluminum hardware. Overall a nice camo helmet. 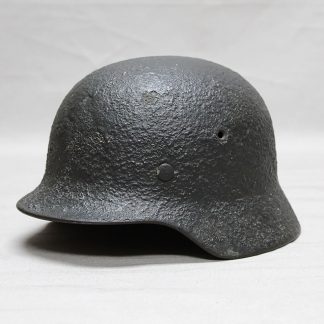